Three of the region’s sound companies united for this large-scale undertaking, including Leggio Sonido, Marti Audio, and Compañía Uruguaya de Sonido, who pooled a significant amount of audio equipment together for one of the most notable rock concerts to hit Montevideo in recent memory.

The outdoor concert had the crowd was situated on the stadium’s soccer field playing surface, in an area about 350 feet wide by 300 feet long.

A second coverage area was elevated about 65 feet, on an incline of 35 degrees in regard to the ground level.

The stage rested in a lateral position, facing 300 feet across the distance of the second level.

“This event was complicated by a variety of technical coordination issues, structural conditions that weren’t anticipated, and heavy rain throughout the setup period,” reports Ariel Marti, director of Marti Audio.

“Everything from stage rigging and alignment issues to having too little time for setup made this one of the most difficult projects I’ve encountered.”

The main PA system covering this immense space consisted of two distinct loudspeaker setups – one for the instruments and the other dedicated solely to the voice of GN’R lead vocalist Axl Rose.

The vocal system incorporated 16 D.A.S. Audio Aero 50 large-format, 3-way line array modules, flown eight per side to the left and right of the front stage at a height of approximately 30 feet.

A look at the main and delay loudspeaker arrangement at Centenario Stadium.

These were flanked by the instrument system’s 32 Aero 50 modules,  each made up of 16 elements flown at a height of about 40 feet.

“There were a number of serious obstacles, but thanks to its controlled dispersion characteristics, along with the ease of handling and cabling, the Aero 50 system enabled us to pull everything together,” notes Jorge Leggio, director of Leggio Sonido.

All of these loudspeakers were powered by Lab.gruppen FP 10000Q 4-channel amplifiers, housed with several Lab.gruppen Lake digital processors that were outfitted with remote touch-panel control of all parameters.

This site uses Akismet to reduce spam. Learn how your comment data is processed.

Thanks for the information. This is a wonderful post!!
Buy Research Paper
Buy Term Paper
Buy Essay 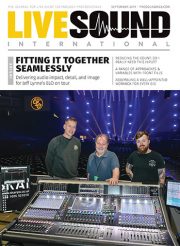